The season so far, and a great weekend

Not posted in a while, so I've got plenty to report on from the last few months. Before christmas when I was still in route mode I had a few great days, highlights being a scary day on Bamford and a headpoint of my long term target Simba's Pride. Having recently watched Ben Cossey walk up it on Committed 1 its got me psyched for getting stronger and fitter, after all, any more control on solo's is always welcome. Couple of videos of these below.

After a "Christmas training regime" which involved not training and eating alot, I headed out to Font with a big group. It was a pretty mixed trip climbing wise, with only a few dry days and warm temperatures, but despite the grim weather some hard lines went down. One day of crushing on Mont Pivot in particular will live long in the memory.

After returning from Font, January has been a predictably unproductive month, spent mostly training for a trip to Spain in late February and staring out at the rain. However when there have been breaks in the cloud they've been put to good use. On one clear, crisp weekend I mananged to gather a couple of good ticks in Spare Rib at Stanton and Bat Out of Hell at Higgar. The latter really highlighted my fitness issues, I look forward to the day when I can climb 10 metres without desperate slapping!

At the moment I'm definatley feeling a transition back into route focus after two months of blocs, and I've got a few trad projects lined up to work on over the next weeks and months. This was hopefully started off at the weekend with a tick of Simon Nadins classic Roaches E7 Paralogism. The route takes a very steep and bouldery line over a large roof. The route boils down to about V6 where you wouldn't want to fall, into glory jugs, with an obligatory cutloose for photos at the lip! I'll stick a video of this on over the weekend!

Thanks alot to Andi Turner for the photos, by the looks of it he'll be ticking this route very soon! 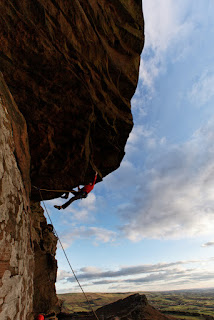 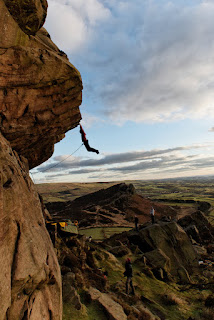 Last but by no means least, we had a great time with the Mammut Pros Jakob Schubert and Anna Stohr on there whistle stop visit. The day at the Foundry was great fun, we spent some time flailing on the Wave, helping out those who'd won a place on the Mammut masterclasses and watching Jakob and Anna crush everything in sight! Thanks alot to Mike Hutton for some brilliant pics of the weekend and of course to the Foundry for putting up with us, especially oli and his bacon obsession.

Below are some photos from the weekend! 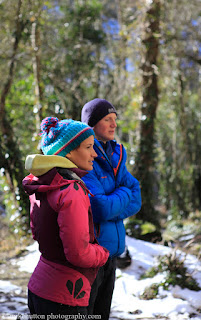 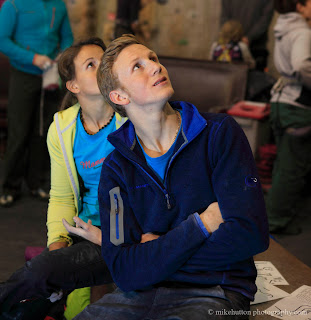 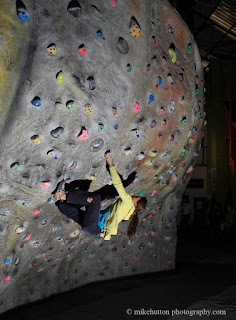 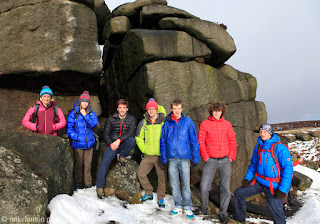 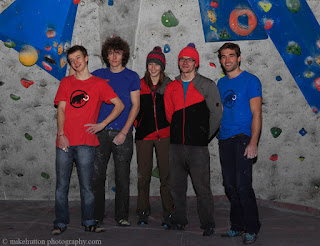